A fast-moving storm from western Canada will spread a swath of snow and slippery travel from the northern Plains to the Great Lakes region into Tuesday.

The storm, known as an Alberta Clipper, will ride one of two pushes of colder air that will put the Midwest back into winter mode and will also put some areas back into a deep freeze for a brief time.

The snow will track along the I-94 and I-90 corridors, bringing a general 1 to 3 inches of accumulation. A few locations can pick up close to half a foot of snow. 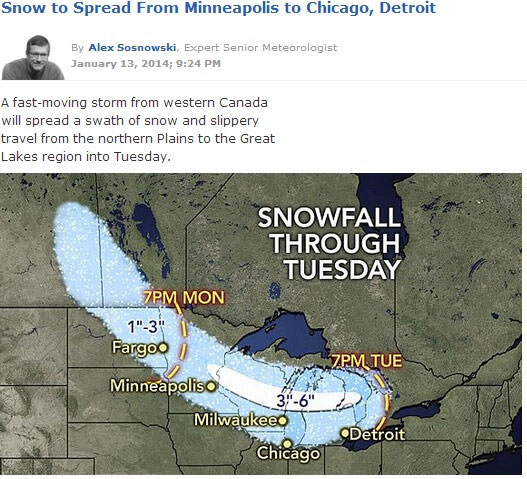 Although snowfall might not be as much as what Michigan residents faced earlier this year, roofing contractors in Michigan warn residents that the snowfall associated with the Alberta Chipper may aggravate the damage caused by snow from winter storm Hercules. Here are a few signs of damage homeowners should be on the lookout for:

Leaks are probably the most obvious sign of damage to a roofing system. If you notice leaks, immediately call reputable roofing companies in Michigan to search and seal the leak before it gets worse.

Strong winds often accompany winter storms. With that in mind, search your yard for shingles that were blown off by the wind. Take the time to search behind shrubs and tall flowerbeds.

Icicles may look pretty, but they can be very dangerous. Icicles can easily break off and injure anyone unfortunate enough to be underneath them, making it important to remove icicles as soon as possible. More often than not, icicles also point to the presence of ice dams.

If you notice any of the aforementioned signs following the previous storm or before the incoming storm, do not delay calling a trusted roofing company like Kroll Construction. Having a professional roofer come and make any necessary repairs now can help prevent having to spend for major home repairs due to water damage in the future.

(Article Excerpt and Image from Snow to Spread From Minneapolis to Chicago, Detroit, AccuWeather, January 13, 2014)